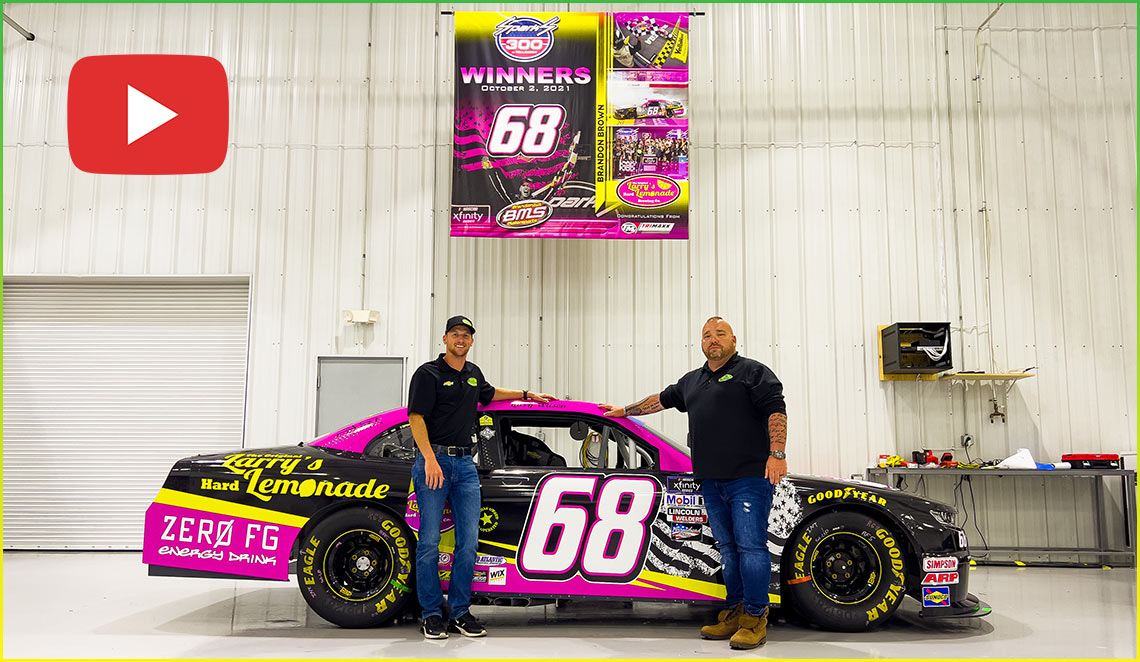 After an eight-month hiatus, Brandon Brown and Larry’s Hard Lemonade are set to make their 16th NXS start as a driver and primary sponsor duo. What first began as a single-race primary sponsorship during the 2020 NXS season opener at Daytona, quickly developed into a successful multi-race program which earned a total of two Top-5 and seven Top-10 finishes. The partnership also saw its first-ever NASCAR victory when Brown took the checkered flag in his No. 68 Larry’s Hard Lemonade Chevrolet Camaro at the Talladega Superspeedway on October 1, 2021. Following their victory, the partnership seemed destined for long-term growth and success. Unfortunately, that growth was stunted after Larry’s Hard Lemonade released an official statement on January 6, 2022, announcing their departure from Brandonbilt Motorsports.

“Many believe that Larry’s Hard Lemonade withdrew its sponsorship of Brandon Brown because of a disagreement between Brandon and myself, however this is something that I would like to address as false. Shortly after our Talladega win, there were a handful of new team affiliates who I felt were influencing some of the team’s decision making in ways that I did not agree with – and for that reason alone, is what ultimately led to the decision for Larry’s Hard Lemonade to withdraw its sponsorship,” said Vic Reynolds, Owner of Larry’s Hard Lemonade. “I recently became aware of the impact that our sponsorship termination has had on Brandon after reading an article which stated that he would be out of the No. 68 for most of the remaining 2022 NASCAR Xfinity Series races, due to a lack of sponsorship funding which stemmed from speculation about Brandon’s character. This broke my heart to read as I know Brandon to be a talented race car driver and a great human being, whose character has been put into question over previous decisions that were out of his control.”

Reynolds continued by saying, “you can do a thousand great things, but one blip on the radar can drastically affect your entire life. This is something that I understand personally, along with what it’s like to be given a second chance – and I feel strongly that Brandon deserves the same opportunity to continue pursuing greatness. So, the decision was made to resurrect our Talladega race-winning paint scheme for this Friday’s NASCAR race at Daytona in the hopes of giving it a new meaning. Instead of people associating it with the events from the past, my hope is that it will now be seen as a representation of new beginnings and a fresh start.”

Brandon Brown and Larry’s Hard Lemonade head to Daytona International Speedway with a partnership best NXS finish of sixth at the World Center of Racing and look to make it back-to-back superspeedway victories as the two have not partnered together for a superspeedway event since their 2021 victory at Talladega.

“I can’t wait to get back to Daytona (International Speedway) this Friday and once again have the opportunity to compete with Larry’s Hard Lemonade. We have a great superspeedway record together – especially with the car that we’re bringing to Daytona, because it’s actually our Talladega (Superspeedway) race-winning Chassis, No. 007 which we’ve decided to pull out of retirement this weekend for the special occasion,” said Brown. “I’m grateful to Vic (Reynolds) and Larry’s Hard Lemonade for continuing to support me through the ups and downs of my racing career. They’ve played a huge part in getting me to where I am today, and for that, I will forever be grateful.”

“Winning last year with Larry’s Hard Lemonade was a dream come true. It’s a goal that every race car driver has from the moment they start racing, but not all of us are fortunate enough to have that dream become a reality,” continued Brown. “Looking ahead to this Friday’s race at Daytona, I would love nothing more than to make that dream of winning become a reality for the second time and take Larry’s Hard Lemonade, Zero FG Energy and Fast Lane Media, Inc to Victory Lane with me as all three will be on the car and have helped to support me through the toughest financial period that I’ve ever experienced in racing. And since we’re racing in ‘The Sunshine State,’ which I know is a market that Larry’s Hard Lemonade has been looking to explore, my hope is that someone will hear our story and help me in trying to make their goals become a reality – much like they’ve done for me.”

The No. 68 Larry’s Hard Lemonade Chevrolet Camaro will make its 2022 NASCAR Xfinity Series debut on Friday, August 26 for the Wawa 250 Powered by Coca-Cola at the Daytona International Speedway, with coverage airing live on USA Network at 7:30 p.m. ET.

In 2008, at one of his famous backyard parties, Larry Wilson created a concoction in which he dubbed, “Larry’s Lemonade” and served it up to his family and friends. It was an instant hit, so Larry decided to team up with St. George Brewing Company to produce small batches of his beverage and have it served in their tap room. As word of Larry’s Lemonade quickly spread throughout Hampton, VA, he knew that he was onto something. From there, Larry’s friend Vic Reynolds (Owner of The Original Larry’s Hard Lemonade) knew that they could quickly upscale production and with the right marketing, expand the reach of Larry’s Lemonade. It was during this process that Bill “Senior” Ballou, a successful businessman, agreed to invest in their venture, to which The Original Larry’s Hard Lemonade Brewing Company® was born!

Brandonbilt Motorsports (BMS) is a race-winning organization that competes in the NASCAR Xfinity Series, and fields the No. 68 Chevrolet Camaro piloted by Brandon Brown. Headquartered in Mooresville, N.C., BMS is owned and operated by successful entrepreneurs, Jerry Brown and David Clarke.

There are no event images at this time.